I’ve long been a fan of Bondhus hex keys. They’re stronger than any I’ve used, without being brittle. And their holders, while not as fancy as others like Wiha or even Wera, hold up very well long-term.

The ProHold screw-holding mechanism on the ball end is a spring-loaded ball similar to that found on a ratchet. You can read more about it here. What I like about the ProHold versus Wiha’s MagicRing: it doesn’t scar the finish on the inside of the fastener head, and in my opinion it does not compromise the strength of the ball tip as much as the MagicRing. Of course I haven’t broken the tip of a ProHold or MagicRing hex driver, so this is speculation on my part.

As a bonus, the Bondhus ProHold are made here in the U.S.A., at least for now. I consider that a reasonable reason to buy them over the Wiha if you’re a U.S. resident.

The key is boiling water. It will not harm the grips or the ratchet. I boil a large pot of water on the stove, and place the new grip in it. I hold the old grip (still on the ratchet) in the boiling water for about 90 seconds. It will expand from the heat. I then pull the old grip off, while wearing mechanic’s gloves for better grip and to avoid being scalded. I pluck the new handle out of the pot of boiling water with tongs, shake the water out of it, then push it onto the ratchet (again wearing mechanic’s gloves). I make sure it’s positioned properly, then allow the ratchet to cool. Voila, a brand new grip! The process takes about 60 seconds, not counting the time for the water to boil.

Earlier this week, I received a new Snap-On FHLF80 ratchet. Like all the Snap-On Dual80 ratchets, it’s smooth and slender. It is a 3/8″ drive, long handle, flex-head model with soft grip. I prefer the soft grips due to the arthritis in my right hand.

It comes with a red soft-grip, which I replaced with an orange soft-grip (part number FH936-12O). Here’s a picture of it with the red grip:

And one with the orange grip:

And closeups of the red and orange grips:

One thing to note about the Snap-On soft-grips: the grips are slimmer than Matco soft-grips. This is a blessing and a curse. The Matco are more comfortable to me, but the Snap-On are slightly easier to fit between obstructions in a modern engine compartment. I haven’t taken the grip off of a Matco yet, but I suspect the shaft is thicker under the grip than the Snap-On. While I’d argue that’s good for strength, the reality is that I’ve never bent one of the Snap-On handles and warranty would cover it anyway.

Today I received a pair of Snap-On Instinct Hard Handle screwdrivers directly from Snap-On. That’s models SHD1O and SHDP22IRO. Both are orange. They’re $11.95 each, which is very steep for stubby screwdrivers.

The drivers arrived packaged very well. They were in a plastic bag, that bag was in a cardboard box, and the box was filled out with packing paper. No damage to the box whatsoever. But the drivers were severely scuffed, with ground-in black crap on the handles. Snap-On knowingly packed abused drivers and sent them to me. If they were $1 each, I probably wouldn’t complain. But they’re $11.95 each. 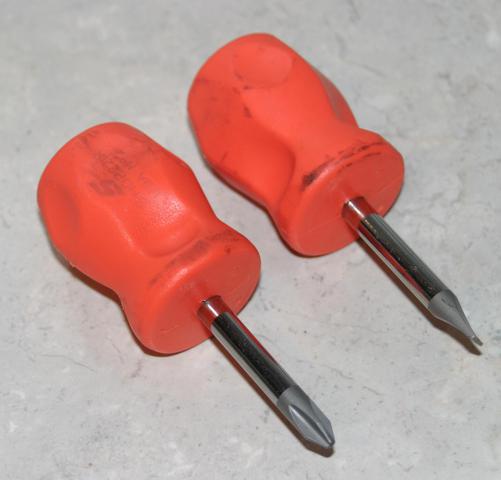 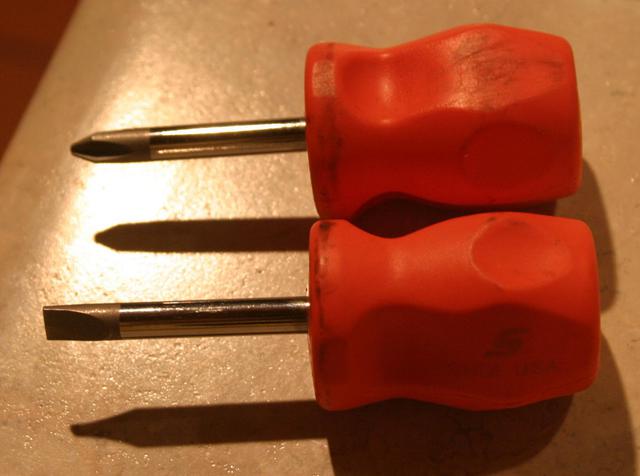 Worse, the tip on the SHD1O is junk. It looks as if someone smashed the end with a hammer and anvil. The thickness is far from consistent. I wonder if someone ran these drivers over with a forklift before shipping them to me. 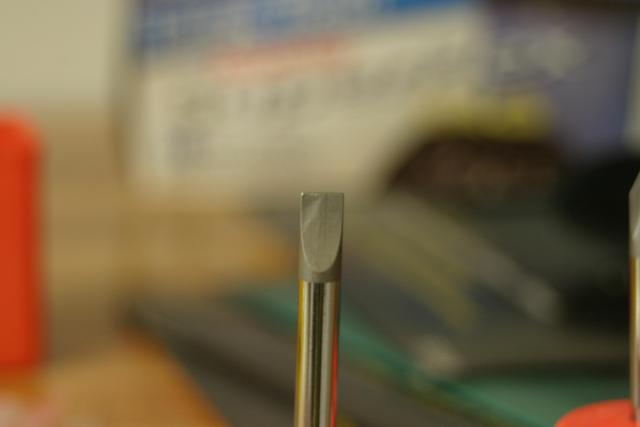 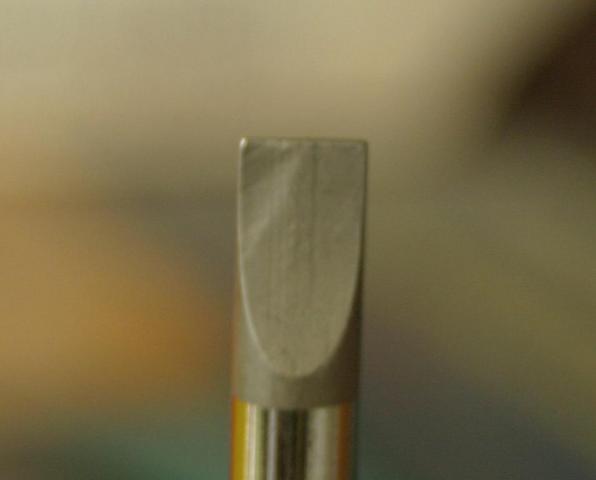 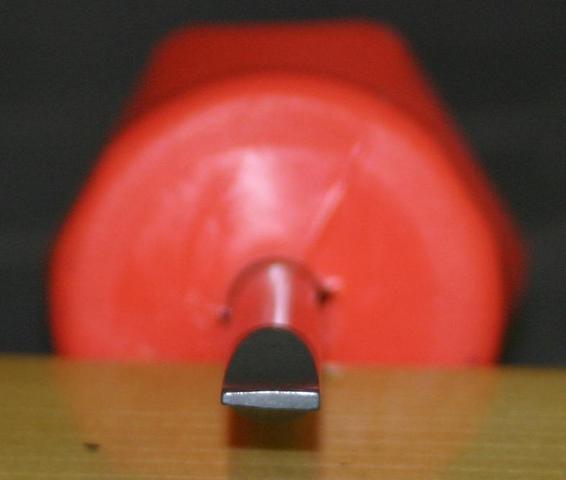 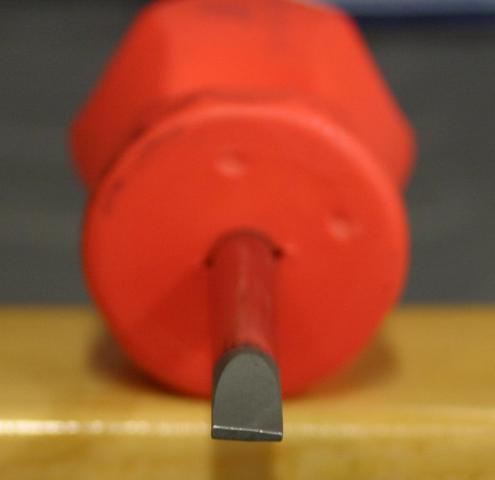 To add salt to the wound, the SHD1O is not like what’s shown in pictures on the Snap-On web site. The picture on the web site shows a wide flat-tip blade, which is what I wanted: 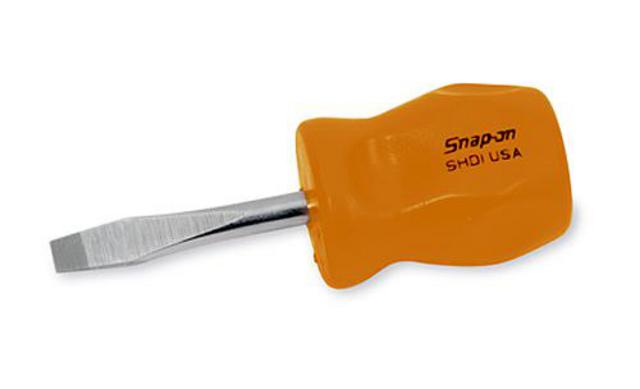 I used to think that Snap-On’s quality control was very good. But these drivers didn’t come in a set: they were individually packed by hand, and hence there’s no reasonable excuse for shipping them to me. Now I get to waste my time having it corrected. And given the low quality of the handles even if they were pristine, I don’t want replacements. I want a refund so I can spend the money on Wiha 311 Series drivers.

In the last few weeks I received some Wiha 533 Series and 534 Series heavy-duty MicroFinish screwdrivers. They were marked down 50% at wihatools.com and carbideprocessors.com.

I like them. They’re definitely heavy duty; they’re the heaviest screwdrivers I own, and much of the weight is in the handle. That’s because they’re designed to be able to accept blows from a hammer; the blades are through-handle with a heavy cap on the end of the handle. 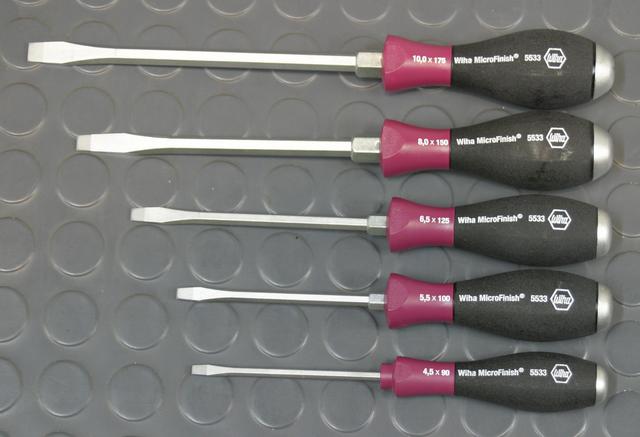 I recently purchased three Stoko Vario SVP hand cleaner dispensers from JD Industrial Supply.  I mounted two black ones in the basement bathroom, which is an unfinished bathroom that’s really only used as a washroom.  One has a 2-liter bottle of Kresto in it, the other has a 2-liter bottle of Cupran in it.  Kresto is good for general grime, Cupran is good for paints, tar, etc.

I mounted a white one in the kitchen, holding a 2-liter bottle of Kresto.

For the price, I really like these dispensers.  They’re not pretty, but they’re very functional.  We have them in the restrooms at work, which see a lot of traffic (hundreds of people are using the one nearest my area).  We haven’t had any problems with them.

I recently received a Toptul GPAW2601 26-piece metric SuperTorque combination wrench set from thetoolchest.ca. It was on sale for $140, normally $170. It’s worth it at either price.

Here’s a picture of the 13mm wrench. Sorry for the lighting, I didn’t have time to take pictures during daylight.

These wrenches are similar to Facom 440 wrenches in some ways: the 15-degree offset of the open end, the beam shape (minus the widened center of the Facom) and the finish. They’re relatively light in weight due to the beam design, and claim to be very strong. They’re shorter than my Wright and Snap-On, which equates to the usual pluses and minuses (good in cramped quarters, a hindrance when you need a lot of leverage).

The more I receive from Toptul, the more impressed I am at their quality control at this price point. The satin finish on these wrenches is flawless, as are the open and box ends. If they had more of a presence here in the U.S., and more offerings in their hard line, I think they’d move a lot of product. I have other Toptul pieces that are equally impressive for the price: sockets (both satin and mirror finish), offset double-box wrenches and stubby rotohead ratchets. I have more of their tools on my wish list.

The Wright D980 set is a thing of beauty. The set comes with a 3/4″ MDF merchandiser board to hang on the wall. The wrenches are very comfortable and very strong, and have a flawless chrome finish. The open ends have WrightGrip on the 7mm to 24mm sizes, and the box ends have WrightDrive. They’re what I’d call mid-length: longer than a Toptul SuperTorque or a Craftsman raised-panel, but shorter than a Snap-On or a Craftsman Professional. The set contains 24 wrenches: 6mm-27mm, 30mm, 32mm. The set is significantly less expensive than an equivalent Snap-On Flank Drive set, while including the very nice merchandiser board.

I’d put these up against my few Snap-On wrenches for quality and strength any day of the week. But they’re thicker, which is a disadvantage when reaching into a very confined space but an advantage in terms of strength and comfort.

This week I received a Grey Pneumatic 81635MRD Duo-Socket set. It’s a 3/8″ drive metric set with shallow and deep sockets from 7mm to 22mm. 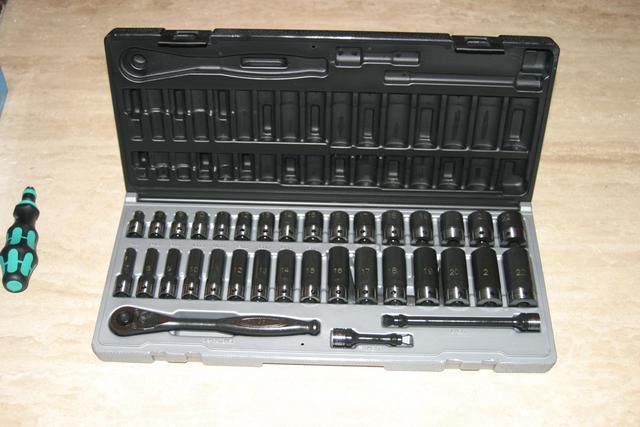 The blow-molded case is nicer than I expected. I usually put blow-molded cases in the recycling bin. They’re often very wasteful of space, poorly engineered and poorly built (Wera cases being one of a few exceptions). While the case for the 81635MRD isn’t nearly as nice as a Wera case, it isn’t wasteful of space and I like the fact that there’s a spot for the handle inside the case. The ratchet isn’t terribly well-balanced with a shallow socket, but it’s fine with a deep socket. The handle is comfortable though, and the drive has NO play at all; I’m guessing this ratchet is sealed up better than any other quick-release ratchet I own, and the head is slim with the quick-release button and the direction change lever recessed. I think it’ll work fine in the tight confines of a modern engine bay.

Now to the sockets, which was the whole reason I bought this set. The Duo-Sockets are intended for both manual and impact tools. Just looking at them, I don’t think they’re any thicker than any of my chrome hand sockets, or at least not by much. I’ve no idea how strong they are, and given that I try not to abuse my tools, only time will tell. But I didn’t buy them for use with my impact tools; I bought them because they have large laser etching of the sizes AND a nicely darkened roll-stamp of the size on the base. They’re easier to read than any of my other sockets.

As shipped, all of the parts are coated with rust-prevention goop that’s tacky in feel. I removed it all with Totally Awesome cleaner and water, then coated them with EEZOX. Here’s a picture of two of the sockets. 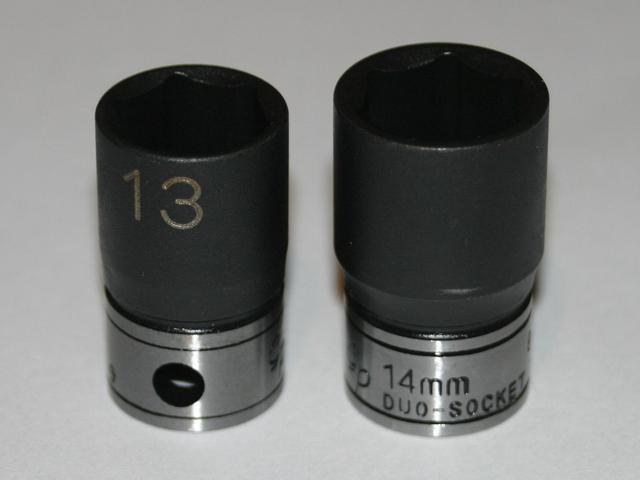